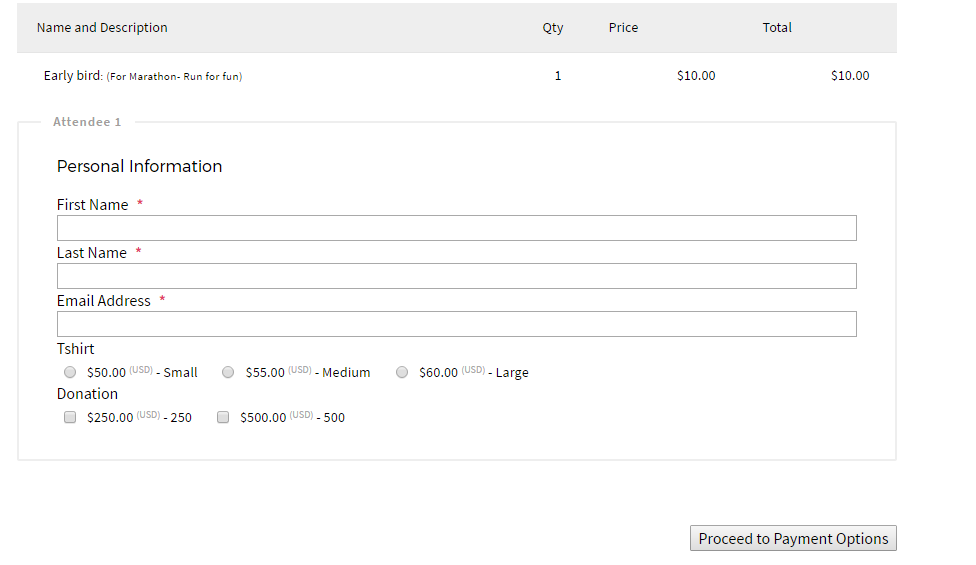 The Price Modifier add-on for Event Espresso 4 by Aparna’s Codex provides new functionality to the question/registration form editor, which allows event managers to create pricing questions that adds an extra cost for the selected items to the total registration cost. Basically, this add on can be used to sell additional items with registration.

The Price Modifier add on is also compatible with the Event Espresso 4 Multiple Event Registration add on!

The Price Modifier add-on is available on our Third-party Add-ons page or directly from the Aparna’s Codex website.

Aparna’s Codex offers help and support for this add-on, while an FAQ is available on the plugin home page.

Wow, we have a lot of updates going out. I was going to split this out into separate posts, but there’s just too much stuff. It would take a month to separate things out. Instead I’ll give you the highlight reel.

The big new changes with Event Espresso is the database optimization. Some serious database optimization. Admin pages in this version load 200% faster, even with a lot of events or attendees. We’ve also fiddled with the event overview ordering so the stuff you want to see is in front of you, rather than having to page down to it.

There are four new gateways introduced in 3.1.32, including Google Wallet and the Canadian gateway, Moneris.

But the thing you’ll see right away is the UXIP Program.

The main reason for this is that now that we have finished the beta version of Event Espresso Arabica (which, as has been mentioned previously, is the “decaf” — or “lite” — version, with no premium gateways added) and have moved on to Event Espresso 4.1, we need to start gearing our development toward how the plugin will be best used. We have no real idea, for example, how many people are using the eWay gateway, or how many people are using 2Checkout as compared to, say, FirstData. And since there may be gateways that no one is using, we are trying to optimize our development by building the gateways that are being used most first for 4.1. In the future, this will give us information about what features you are using, so we can get an understanding of how you are using Event Espresso which will help us gear our development more toward your needs. Surveys are great, but you only get a limited number of people responding to surveys and that might not be representative of the whole picture. This will securely transmit information to our server that we can aggregate and use to directly guide the future development of the plugin. You can read more about the User eXperience Improvement Program here.

A new version in the wild means a new pre-release. 3.1.33 will be a smaller release but adds three new gateways, including an Infusionsoft integration and a Quickbooks gateway. Oh, and a cool new function, espresso_get_event that can be used to get all the information for an event when passed an event_id (e.g. espresso_get_event($event_id). This is used by the updated Espresso Social add-on, described below.

This update adds only one thing, but it’s a biggie. The Mailchimp 1.1 add-on adds support for Mailchimp Groups. You may have heard us talk about it on the Espresso Bar hangout with Eric from IvyCat (if not, go check it out). This is a sweet little feature that we thought warranted a major feature version bump and came out of some real-world scenarios and uses of Mailchimp and the Event Espresso Mailchimp Integration add-on. You can thank Eric in the forums or send him some love via the Event Espresso Pros page.

This one was probably largely inspired by Seth’s insomnia. We’ve had requests in the past to integrate some kind of CRM into Event Espresso. Infusionsoft is great because they have an open API that made it really easy to do some really interesting things. If you’re already an Infusionsoft user, you can basically use your Infusionsoft dashboard instead of your Event Espresso dashboard in the WordPress admin. Customer records are created automatically even when the attendee was registered with a manual or offline payment. Payment records are updated automatically and you can use any of the built-in Event Espresso gateways or your Infusionsoft Merchant Account.

Here’s one that I worked on. This update fixes the Facebook like button! However, even more exciting is that it will roll out a feature, when combined with Event Espresso 3.1.33, that will add opengraph tags to the header of your site, allowing better and more specific information to be sent to Facebook with your like. What information, you ask? How about support for event thumbnails? Or descriptions that pull from your event descriptions? This is made possible by the new espresso_get_event function added to core.

What else got some love? I’ll tell you:

What about that Arabica thing?

Don’t worry, we’re still busy working on the next generation version of Event Espresso. Development has moved on from the decaf version (4.0) to the regular version which will make it’s first appearance as 4.1 and include a migration script to get you moved over from the legacy (3.1.x) versions of Event Espresso.

Questions? Comments? Let us know what you think in the forums or the comments below.