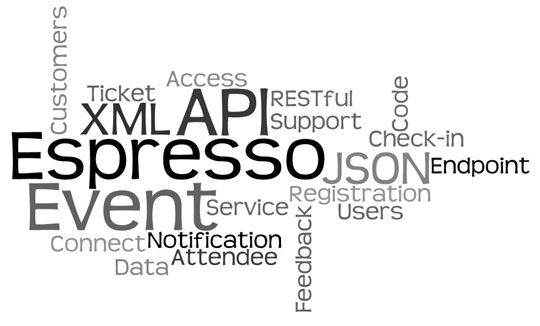 What kind of really useful stuff can I build?

Using the Event Espresso API, you can get information on all events and attendees, and even check attendees in and out of events. Supposing you have WordPress installed and active on mysite.com, once this addon is activated you can send an HTTP GET request to http://mysite.com/espresso-api/v1/events/public to retrieve all the event information from your site in JSON or XML format, which your client application can then use and display however you like. You can access and work with most of the Event Espresso admin features, allowing you to create solutions based on your needs. The API enables developers to build innovative and engaging applications that can interface with any website that uses the Event Espresso plugin for events, classes, meetings, scrapbook conventions, concert ticketing, including:

Is the API supported?

Yes, Event Espresso customers have access to our Restful API Codex and support in the support forums. The API is compatible with Event Espresso version 3.1 and 3.2 (coming soon).

How does it work?

The Event Espresso API gives developers a complete API platform for directly accessing data event and attendee data securely and efficiently from outside your web server. All a developer needs to know about is the API Endpoint URL for your site. Example: https://eventespresso.com/testdrive/espresso-api/v1/events/public.pretty_json

Anyone with a current Event Espresso Business or Developer Support License or Ticketing addon can download this addon for use on their site, from within their profile/account page.

Is this a replacement for the Espresso Services API?

Yes and No. The current versions of both the Event Espresso iPhone and Android mobile apps CANNOT be used with this API. However, you should have no problems running both API’s side by side. We are working on switching over the iPhone app to the new API as soon as possible. We are also actively looking for someone to help us switch the Android app to the new API. The new Event Espresso iPad app will be available soon.

Why did you create this addon?

We are hoping the addition of this addon will drive developer adoption around for Event Espresso plugin and our community of dedicated users.

Behind the scenes: the tools we use at Event Espresso

We’ve been at this for over 3 years and in that time, we’ve used a ton of different tools to get the job done. Event Espresso has gone from being a one-man show to a team of 10+ and in that time we’ve learned, largely through trial and error, ways to effectively communicate to each other and our users. Here are a few of the tools we use internally and for EventEspresso.com.

We’re predominantly Mac users with a few holdouts running Windows 7 and Linux. The apps covered here will be a mix of the popular votes from across all three platforms as well as web-based apps or systems.

We’ve been using IRC internally for the past year. It has successfully enabled us to communicate better as a team and respond to issues that come up in the forums and as we are developing code much faster. It’s hard to imagine how we managed to do things before we were using IRC. We have one closed channel we use for internal and development communication and another channel we’re planning on opening up to VIP members soon. To keep our private channel closed, we’re using IRC access restrictions. We also have a bot running Phergie that is able to do helpful things like pass messages to other team members who are away from their computers and Google searches, or not so helpful things like tossing each other a cookie, beer, wine or cocktail.

Phergie is also feeding posts from our P2 site (mentioned below) to keep the team updated on new comments and discussions happening there.

As far as apps go, for Mac, most of us started off with Colloquy before moving on to other things like LimeChat and Adium. For the Windows users among us, we’re predominantly using mIRC, and Xchat is the most commonly used client for Linux, though a Windows version also exists.

In the last month we’ve started trying to use Twitter for both internal and external communications. Everyone at Event Espresso was already on Twitter, and Event Espresso has it’s own Twitter account. On our personal accounts, we use the #EventEspresso hashtag for general Event Espresso-related tweets and #eesupport or #eedev for support or development-related tweets. Not only can we keep each other in the loop with what we’re doing, but this gives our users a level of transparency about what we’re up to as well. So, what are we using to manage Twitter? For OSX, there’s the native Twitter app in the App Store or, for everyone, the cross-platform web app TweetDeck.

To the developers out there, it should come as no surprise that Chrome and Firefox are our browsers-of-choice. The powerful tools of Chrome’s built-in inspector and Firefox’s Firebug extension are invaluable to developing and testing markup. For the Mac users among us there’s Parallels and Oracle’s VirtualBox for Windows virtualization for testing Internet Explorer.

Formerly, the popular favorite for screenshots with annotations was Skitch. Recent changes to the platform have been universally less well received by our team, and some of us have begun looking elsewhere. The Awesome Screenshot extension for Chrome is…awesome…for browser-based screenshots and Droplr and Screencast.com have also been used by some of us for sharing screenshots. I wrote up an Alfred* extension to replace the timed screenshot feature that Skitch dropped from their app.

Event Espresso uses Google Apps extensively, so many of us just use the Gmail interface for mail. However, the Sparrow for Mac is hands-down the best desktop email client and also has an iOS app replacement for Apple Mail. Speaking personally, Sparrow makes me actually enjoy looking at my email inbox. It’s definitely worth downloading the free (ad supported) version and convincing yourself it’s worth the ten bucks to use it without the ads.

While the cross-platform workhorse of FileZilla is definitely a favorite, some of the Mac users among us cling to Transmit, by Panic (who also make Coda), which also allows file transfers to Amazon S3 buckets (which we’re using as our CDN).

A good IDE is important when you’re spending all day staring at it. Sublime Text 2 gets our popular vote with some runners up being Coda and NetBeans. (If you’re looking for a good IDE or have just gotten started with Sublime, this is a great resource that goes through a lot of the amazing built-in features of the program as well as the plugins that can be added.) Windows users (that don’t want to deal with NetBeans) can either grab a copy of Sublime as well, or take a look at the free Notepad++.

Version control is essential for any development project, large or small. Even if you aren’t part of a team of developers, version control is invaluable in being able to “roll back” changes to an earlier version when something breaks. Having a solid, reliable version control system (and app) is a required part of ensuring that everyone on the team is looking at the same — and the correct — version of the code. Event Espresso currently uses Subversion for our version control (though we plan to eventually move to Git). Most of us Mac folk started out using Versions but have since migrated to Cornerstone. For Windows, there’s TortoiseSVN and for Linux, we recommend RapidSVN (if you’re not just more comfortable using the commandline). For Git, we recommend Tower (for Mac), the GitHub Git client (for Mac/Windows) or TortoiseGit (for Windows). Alternately, if you’ve already started using Sublime, there are excellent Git and Subversion extensions for Sublime, and NetBeans also has integrated SVN support as well as a plugin for Git support.

What other programs and apps are we using? Here are a few of our favorites:

But what about the plugins we use for WordPress, you ask? We use a combination of custom-built plugins, premium plugins and free plugins from WordPress.org. Here are the ones that are most frequently used or most essential to the site:

What are your favorite tools to use in your business or on your website? Let us know in the comments!